Dogs are a man’s best friend and this is as true to you as it is to the world’s most famous celebrities. Many of your favourite stars share a love for dogs and have canine buddies of their own. To celebrate the adorable pooches who live the celebrity life, here at puppies.co.uk, we have created a list of some of the most famous dog-celeb pairings in the show business today, along with their stories.

Time to discover the dog-tastic world of celebrity pets!

Kaley and her husband, Karl Cook, were extremely happy to welcome Larry to their home (pictured below) following the death of the actress’ dog Norman who had been with her for over 14 years. 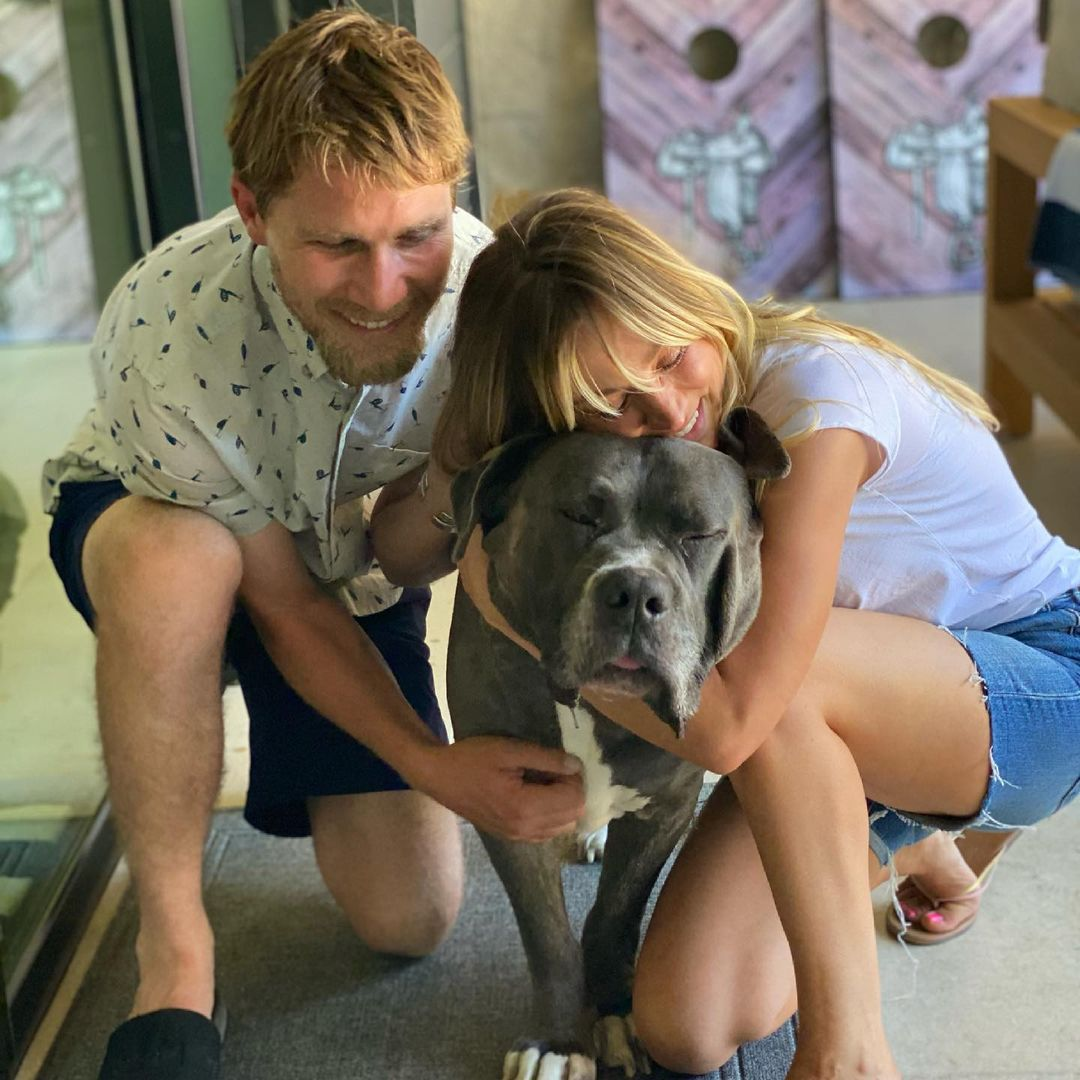 Justin Bieber and his wife Hailey Bieber are proud owners of an adorable Maltese Yorkie called Oscar. The Bieber family shared the news about adopting their “dogson” Oscar back in December 2018  (pictured below) and they have been showing off photos of the furry pup on social media ever since.

Oscar isn’t Justin’s first dog or pet either. Over the years, the singer has owned at least three more dogs, two cats, a hamster that he used to bring on stage during concert performances and even a capuchin monkey which now lives in a German zoo. 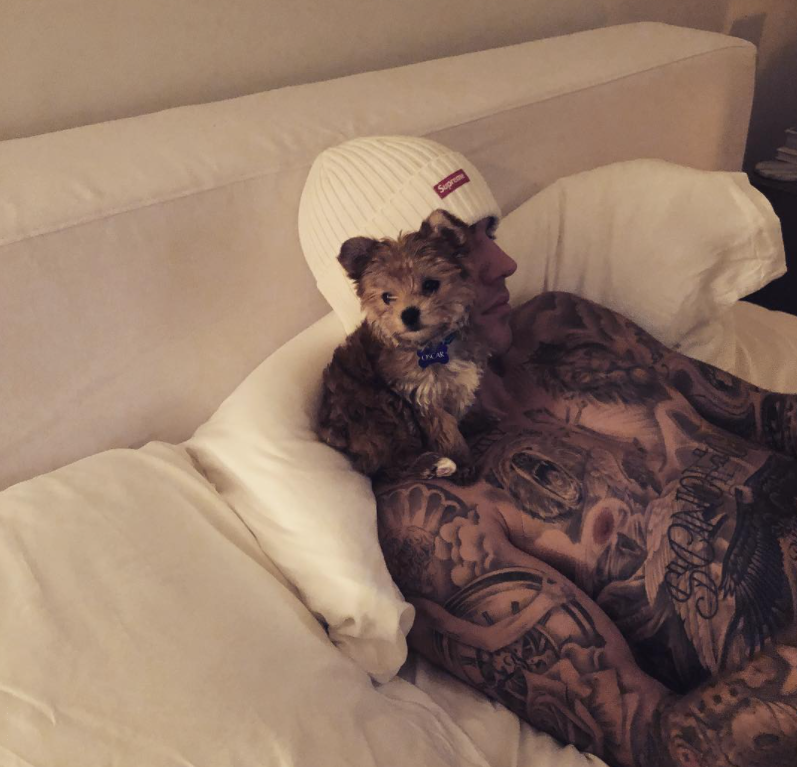 British heartthrob Tom Hardy is one of the most vocal dog lovers in the celebrity world and when his French Bulldog, Blue made a red carpet appearance at the premiere of Venom: Let There Be Carnage, the charismatic pet-owner pairing stole the hearts of fans and press all over the world.

The actor had his first dog - Mad Max when he was 17. He used to bring his Staffie-Labrador along at drama school and had him until 2011 when the dog sadly passed away. Soon after losing his four-legged friend, the Lawless star took in a stray dog who he named Woodstock. Unfortunately, Woodstock also passed away in 2017. 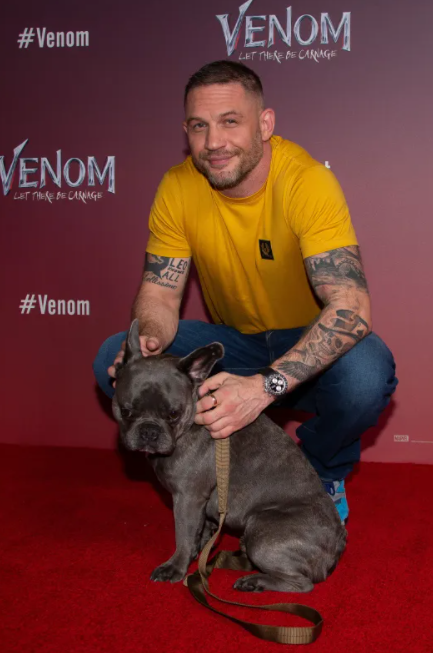 Everyone who has watched a talent show that had Simon Cowell as a judge would know that despite his sometimes harsh demeanour, the British celebrity entrepreneur has a soft spot for dogs (and rightfully so!).  Mr Cowell has three Yorkshire Terries of his own - Squiddly, Diddly and Freddy (pictured below). Freddy belonged to Simon’s late mother and moved in to live with the star when his mum passed away.

In addition to the famous Yorkie trio, Simon Cowell also has a fourth dog - Daisy. She is a rescue dog he fell in love with on his holiday in Barbados back in 2018. 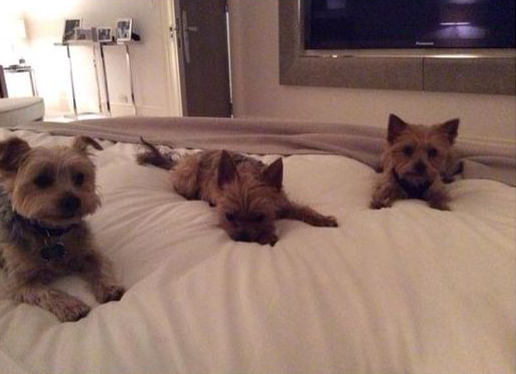 Demi Lovato has two Yorkipoo pups - Batman (since 2015) and Cinderella (since 2017) who have become quite the celebrities on social media too. The two mini dogs are not just cute, they are brave too. In July 2017, Cinderella and Batman prevented a robbery in progress at Demi’s LA home. They spotted the burglar climbing onto her balcony and alerted the property manager whose appearance bade the thief flee.

Before getting Cinderella and Batman, the singer had a Maltipoo Buddy who sadly became the victim of a brutal coyote attack. Little Buddy has been immortalised with a tattoo on Demi’s ankle. 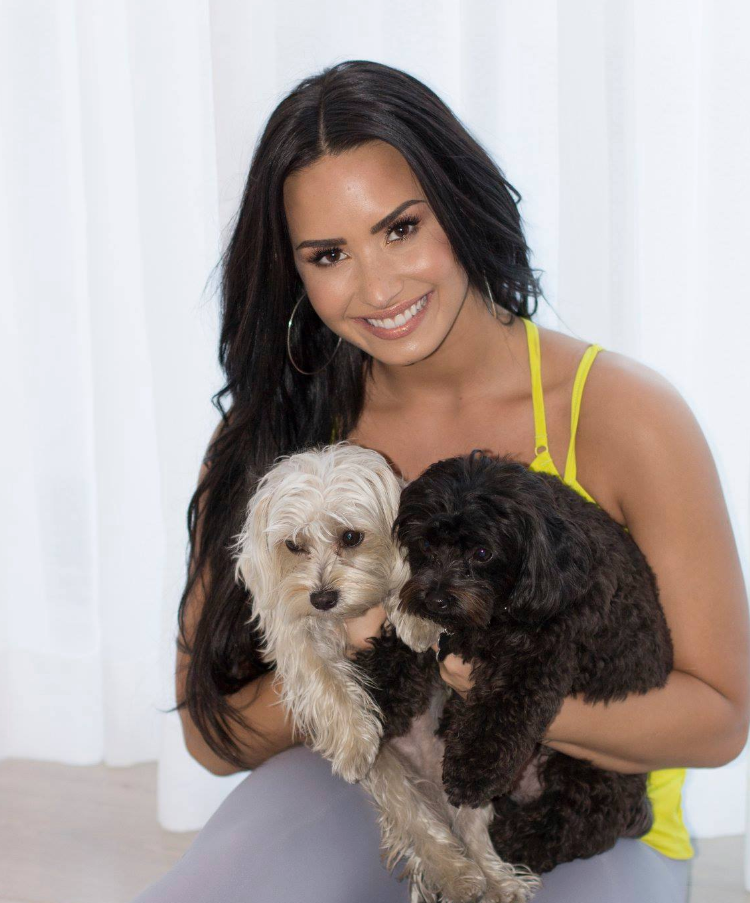 Talk about a charismatic pairing! Captain America superstar Chris Evans has been entertaining his fans across social media channels with adorable photos featuring his rescue dog - Dodger. Evans met his four-legged friend back in 2017 while he was filming a scene in a dog shelter for the movie Gifted. Once he realised that Dodger wasn’t a fellow actor but he was actually up for adoption, Chris immediately decided to take him in.

Since then, the pairing has been living happily together and their friendship has been well documented across social media. The mixed-breed boxer underwent hip replacement surgery in February 2021. The operation was a success and Dodger looks as happy as ever (pictured below). 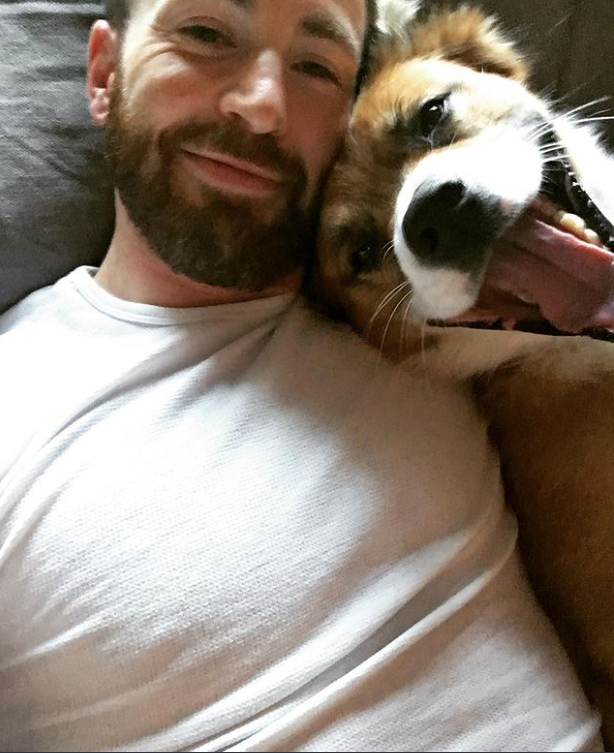 Angel is the latest addition to the lovely pack of pet dogs owned by Miley Cyrus. The Wrecking Ball singer adopted the large, grey pitbull in February 2021, a month after her other rescue dog - Mary Jane was taken away by cancer. Cyrus has been advocating against the common belief that Pitbulls are dangerous and aggressive for a long time and bringing Angel into her home was one more step to demonstrating her point.

In the picture shared by Miley below, you’ll also see two more of her dogs - Emu and Bean. The dog-loving superstar has three more pooches - Happy, Barbie and Floyd. The beautiful Staffordshire Bull Terrier, Tessa, has been a part of Tom Holland’s life since she was a puppy. The actor took her in 2014 and has been sharing photos of his adventures with his pup on social media ever since (see pictured below). Tessa has also made an appearance on the red carpet where she was photographed with other celebrities, such as Avengers: Endgame co-star, Robert Downey Jr.

This grey-coloured good girl is yet another example that Pitbulls have an undeservedly bad reputation. The Spider-Man star has been quite vocal about his opinion on this topic too. 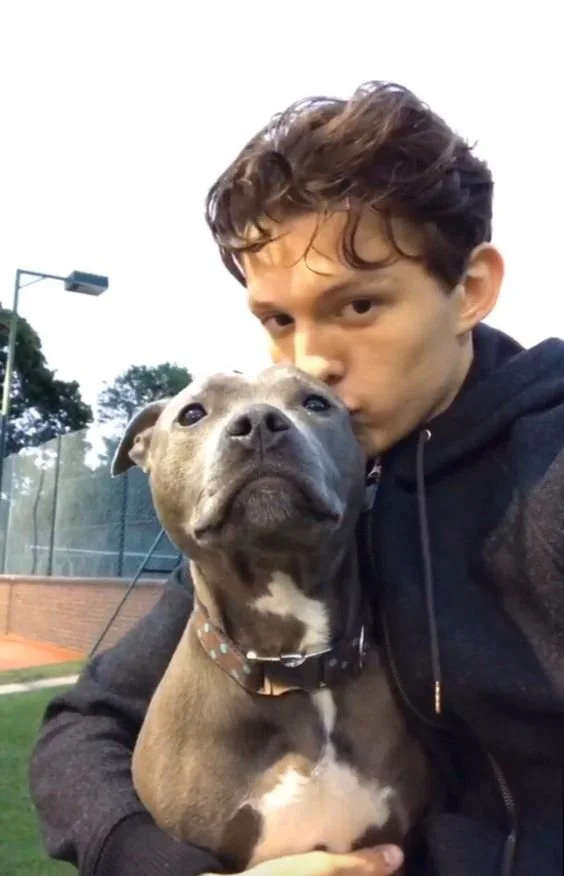 Loved the images in this article? Feel free to follow the celebrities’ social media accounts for more pup-tastic news and updates.

Craving more exciting stories about your favourite stars? Check out our Celebrity News section for the latest in showbiz. 15 German Dog Breeds For Your Family