Are You Looking to Buy or Adopt a Newfoundland? 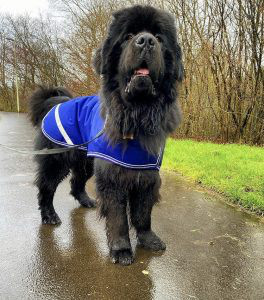 Why Newfoundlands are great

Newfoundlands are gentle giants; they are docile, eager to please and love to spend time with their humans. The Newfoundland is particularly well known for being a great companion for children, making them a very popular family pet. Some highlights:

Things to consider when looking at Newfoundlands for Sale

Newfoundlands are excellent companions with a lot of fantastic characteristics but, like all breeds, there are some factors that are important to be aware of when considering a Newfoundland puppy. Some downsides to the Newfoundland:

As one of the oldest dog breeds in existence, the origins of the Newfoundland are not fully known and the topic is debated with multiple theories regarding the breeds early development. Perhaps unsurprisingly, the Newfoundland breed developed in a Canadian province called Newfoundland where they were used as working dogs. Unlike many dog breeds, the Newfoundland was actually used for working in water as well as on land. They would often assist fisherman with carrying heavy loads and would swim a line from the ship to the shore but the breed became most renowned for their work rescuing struggling swimmers. It is thought that Newfoundlands were brought over to Europe by fishermen in the 1800’s when it was common to see them aboard sailing vessels and along shorelines. There is no denying that Newfoundlands have natural abilities in the water and their strength, water-resistant coats and webbed feet make them ideally suited to working in and around the sea. Although it’s not known exactly when this breed was first seen in the UK, an English Botanist named Sir Joseph Banks acquired several Newfoundlands in the late 18th century. In the 19th century the breed became very popular in the country and the Newfoundland Club was formed in the UK in 1886. As with many breeds, the World Wars had a negative impact on the Newfoundland numbers but in the 1950’s the population began to stabilise again. The breed remains extremely popular to this day as both a companion and family pet. Contributing to the popularity of the Newfoundland is their portrayal in books and films, one of the most well-known examples being Nana, the nurse dog in Peter Pan. 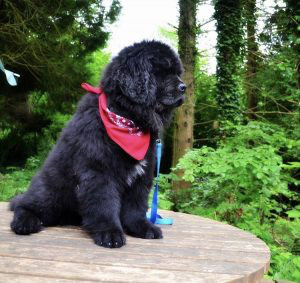 www.instagram.com/tedthenewfoundland/
Newfoundlands are often described as looking a lot like bears! They are giant but well-balanced dogs that look extremely strong and powerful while remaining gentle with expressive deep brown eyes. Newfoundlands are broad, muscular and have a dense, fluffy, heavy coat that is actually water-resistant.

How big is the Newfoundland?

An adult Newfoundland is a large dog, standing at between 66-71cm at the withers.

How heavy is a Newfoundland?

A female Newfoundland weighs around 54kg while males are slightly larger at around 68kg.

What Colour is the Newfoundland?

Newfoundlands can be black, brown or grey either solid or with white markings. They can also be white with black markings. 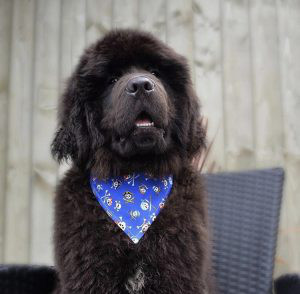 Calm, kind and gentle are three words that are often used to describe Newfoundlands. Despite their size, they are sensitive and quiet characters.

Newfoundlands can be great guard dogs as they are protective of their families and will alert you to anything suspicious. However, they are not aggressive and are innately friendly so they are better suited to being a guardian for children and spending time with the family.

Do Newfoundlands bark a lot?

No, Newfoundlands are quiet dogs that are not known for barking.

Are Newfoundlands easy to train?

As Newfoundlands are intelligent they are easy to train using positive reinforcement techniques. They can be stubborn so training and socialisation should start as early as possible.

They can be playful at times, Newfoundlands love to entertain but they also like to think things through and take their time when playing games.

Are Newfoundlands good with children?

Newfoundlands are fantastic with children, they are sometimes called the ‘nanny’ dog thanks to their gentle and caring natures. Newfoundlands thrive in a family environment.

Are Newfoundlands good with other pets?

This breed tends to be good with other dogs but generally Newfoundlands aren’t the best with cats and smaller pets so care should be taken during any introductions or interactions.

Can I leave a Newfoundland Alone?

Newfoundlands form very strong bonds with their family which means they are not happy if left alone. They are well suited to households where there is always one person at home to avoid separation anxiety and destructive behaviour.

Yes, Newfoundlands are a natural in water so will often jump at the opportunity to swim.

How long do Newfoundlands live?

The average lifespan of a Newfoundland is 8 – 10 years.

How much exercise does a Newfoundland need?

A daily walk of at least an hour is necessary and if possible, your Newfoundland would love frequent opportunities to swim too. It is important to keep your Newfoundland cool during hot weather as their heavy coats mean they can overheat easily.

What are Newfoundlands Common health issues?

The Newfoundland breed is prone to a few health conditions including:

How much space do I need for a Newfoundland?

As Newfoundlands are very large in size they are not well suited for living in an apartment. Ideally, they should be in a house that has a secure garden to enjoy.

What should I feed my Newfoundland?

A high-quality diet is essential for your dog’s health and wellbeing. When bringing your Newfoundland puppy home, it is important to follow the feeding schedule provided by the breeder as this will prevent an upset stomach. Any changes made to your dog’s diet should be made gradually. As a rough guideline, a 60kg Newfoundland can be fed between 520 – 680g of good quality dog food each day.

How much grooming do Newfoundlands need?

When it comes to grooming, Newfoundlands are high maintenance. They have thick double coats that require daily brushing to prevent matts from forming.

Yes, Newfoundlands are heavy shedders and shed throughout the year. They will shed noticeably more twice a year during spring and autumn.

How much does it cost to keep a Newfoundland?

As a rough guide in pricing: Cost to buy: roughly £800+ for a well-bred Newfoundland puppy Other costs (Vet, Food etc): £150 per month

You can read our general buying guide here (/advice-on-buying-a-puppy/), with the most important thing being going to view your Newfoundland Puppy, seeing it with its mother, and checking the quality of the breeder. More specifically, here is some Newfoundland puppy buying advice: