What are DNA Health Tests for Dogs?

A 'Health Test' (NOT to be confused with a 'Health Check') is a set of DNA tests designed to reveal hereditary genetic diseases in dogs. The idea is that in the parents of the litter, at least one of the parents should test clear for a genetic disease to ensure this disease will not be passed down to the puppies. A common misconception is that the puppies are the ones who are tested which is false.

You may remember from school biology, that two parents pass on 50% of their genes to their offspring. DNA testing in dogs is to ensure that the bad genes do not get passed down, by making sure that at least one parent is 100% clear so that the puppies will not develop the disease.

If a dog receives a positive test to being affected (i.e. they have the disease) by a serious disease, then ideally it should not be bred from. A dog that is a carrier of a disease but not affected by the disease can still be bred from, as long as its mate is 100% clear to ensure the puppies will not develop the illness later in life.

An example of a test is the PRA test (Progressive Retinal Atrophy). The cells of the dogs retina in the eye receive light from the environment, then send the information to the brain where it becomes vision. PRA causes the cells in the retina of the dogs eye at the back to degenerate and die early. There are a few types of PRA, but the DNA test is there to give the puppies of two parents the best chance of not developing this disease in later life.

You can quickly see how it can become irresponsible to not health test the parents of a litter.

A 'health check' is absolutely not the same and must not be considered an alternative to DNA tests. A check is really just a once over by a vet to say the puppy is currently healthy, but doesn't say anything about its future potential to develop a disease. It's a bit like assuming one MOT for you car will stop it getting issues ever again.

What Tests Does My Breed Need?

This is actually very variable. The Kennel Club will produce standards for each breed which can be found here: https://www.thekennelclub.org.uk/search/breeds-a-to-z/

Some breeds actually don't need any DNA tests because it is a very healthy breeding stock.

Furthermore, for Crossbreeds which are not therefore recognised by the Kennel Club, you should visit the Breed Club's recommendation on their websites as the breed club will typically run its' own scheme. An example is the Cockapoo Club of Great Britain, which recommends the following: 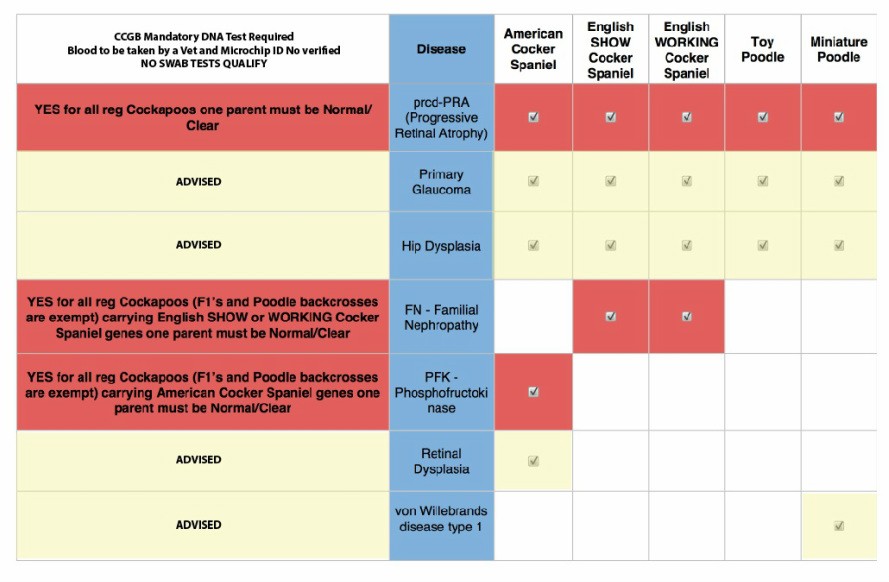 How Much Do Dog Health Tests Cost?

It is the breeders responsibility to pay for the parents of the litter to be health tested. Costs will vary from breed to breed and organisation to organisation (see below). However, as a rough ballpark here are some expected costs (as of 2021):

Airedale Terrier health tests from Labokiln (all 3 separate tests that are in the Kennel Club requirements): £135 ex VAT per dog.

Where Can I Get Dog Health Tests Done?

You should always ask a breeder where the tests were undertaken, as then the results will be independently verifiable.

Almost all results are published with The Kennel Club. You should ask your breeder how you can access a copy of the test results of the parents of the puppy you are looking at. https://www.thekennelclub.org.uk/search/health-test-results-finder/

SEE ALL ARTICLES >
READ NEXT ARTICLE >